Brahms’ Piano Concerto No.2 with Adam Klocek & the Filharmonia Częstochowska

Johannes Brahms
Piano Concerto No. 2 in B flat major, Op. 83

In the first half of the concert, Head of Keyboard at Chetham’s School of Music, Murray McLachlan, will perform the first concerto. In the second half the outstanding Eugen Indjic takes the lead for Brahms’ Second Piano Concerto. Both soloists will be accompanied by the Stockport Symphony Orchestra and conductor Stephen Threlfall. Eugen Indjic was born in Belgrade in 1947. His mother was a Russian amateur pianist and his father a Serbian army general under King Peter II of Yugoslavia. Immigrating to the US with his mother at the age of four, he there became interested in music after hearing a recording of Chopin’s Fantaisie-Impromptu and Polonaise in A flat major.
Moved by a desire to master these pieces, he took systematic piano lessons with Georgian pianist, Liubov Stephani and Benjamin Kalman, a student of Emil von Sauer in Berlin.
Eugen Indjic made his first public performance at the age of nine, appearing with the Springfield Symphony, playing Mozart’s D minor Piano Concerto.
After two years, Mrs. Stephani introduced him to Alexander Borovsky (the eminent Russian pianist and Prokofiev’s classmate in Yesipova’s class) who taught him in Boston for the next five years (1959-1964).
At the age of eleven, he was already playing Liszt’s Campanella and 13th Hungarian Rhapsody on NBC television and at twelve, made his first recording for RCA Victor on Rachmaninov’s own piano, playing Beethoven’s Diabelli Variations.
At thirteen, he performed Liszt’s Piano Concerto No.1 and a year later the Brahms Piano Concerto No.2 with the Washington National Symphony Orchestra.
Between 1961 and 1971, invited by Arthur Fiedler, Eugen Indjic appeared numerous times each season with the Boston Pops orchestra. His first concert tour was in Denmark (1963), together with Alexander Borovsky.
“He plays Chopin as a pole, Debussy as a Frenchman and Prokofiev as a Russian master” wrote the Politiken of Copenhagen.
After his graduation year from Phillips Academy in Andover, Erich Leinsdorf invited him to play Brahms’ Piano Concerto No. 2 with the Boston Symphony, making him the youngest soloist ever to appear with that orchestra.
Leonard-Bernstein Scholar at Harvard University, he studied musicology and composition with Laurence Berman and Leon Kirchner graduating “cum laude” in 1969. Kirchner, a student of Schönberg, introduced Indjic to Schenkerian analysis, of which he remains an ardent proponent.
Bernstein qualified him as “an extraordinary pianist and musician” and Emil Gilels, for whom he played often in these years called him “a unique and inspired artist”.
During his Harvard years, he took private lessons at the Juilliard School of Music with Mieczysław Münz and Rosina Lhévinne’s apprentice Lee Thompson.
In 1968, he met Arthur Rubinstein, who until his death remained a friend and mentor, calling Indjic “a world-class pianist of rare musical and artistic perfection”.
His friend, the composer Alexandre Tansman, who introduced him to Vladimir Horowitz, dedicated Caprice: A Piacere to him.
At that time he continued studying composition with Nadia Boulanger in Paris.
He settled in France in 1972 after marrying Odile Rabaud, granddaughter of the French composer Henri Rabaud (Fauré’s successor at the Paris Conservatory) later becoming both an American and a French citizen.
Prize-winner of three international contests – Warsaw (1970), Leeds (1972), and Rubinstein (1974), Indjic has performed with the leading orchestras of the United States, South America, Europe and Asia, and under such conductors as Bernstein, Bělohlávek, Casadesus, Fedoseiev, Gergiev, Gielen, Jochum, Kubelík, Leinsdorf, Sanderling, Sinopoli, Solti, von Matačić, de Waart, Wit and Zinman, among others.
He continues to play regularly on great world stages such as Carnegie Hall, Avery Fisher Hall, Queen Elisabeth Hall, the Concertgebouw, the Musikverein, Salle Pleyel and Théâtre des Champs-Elysées, Tchaikovsky Hall, La Scala, etc.
Eugen Indjic was invited to participate in a televised co-production (France, Poland, Japan) of Chopin’s complete works and has recorded for Polskie Nagrania / Muza, Sony, RCA Victor, Claves and Calliope.
His discography includes works by Chopin, Debussy and Schumann (now all re-issued by the Andante Spianato label) as well as works by Stravinsky and Beethoven.
Arte Nova Classics has released live performances with the SWF Orchestra of Tchaikovsky’s Concerto in B-flat minor with Ahronovich and Rachmaninov’s Paganini Variations with Sinopoli.
His recording of Chopin’s Mazurkas was doubly acclaimed because of the Joyce Hatto hoax. The English pianist signed her name to this disc and received rave reviews.
The famous French film director Bertrand Blier chose his recording of Chopin Piano Concerto No. 2 for two films : « Merci la vie » (1991) and « Combien tu m’aimes » (2005).
In addition to performing, Indjic regularly teaches master classes in Europe – notably at the historic Schola Cantorum in Paris – Japan and the United States, and is a frequent jury member of international competitions including the Chopin, Liszt Wroclaw, Rubinstein Tel Aviv, Prague Spring Festival, Lisbon Vianna Da Motta…
In 2010, he was named “artist-in-residence” at the Prague Symphony Orchestra.
Eugen Indjic is Doctor Honoris Causa of the Belgrade University, an honor that has been bestowed only on two other foreign musicians : Witold Lutoslawski and Zubin Mehta.

“I do not know what to admire most in him: the supreme command of the instrument, the refined delicacy of sound, an interpretation, scrupulous and transparent in everyway… The concert itself becomes a work of art. One could not conceive a more complete musicality and more exquisite perfection, attached to this simplicity that strikes everyone.”  Vladimir Jankélévitch 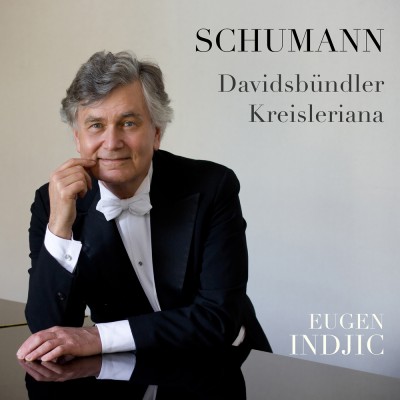 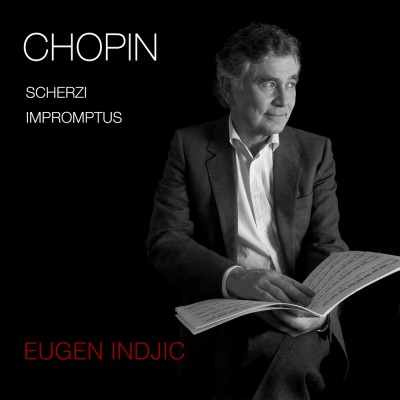 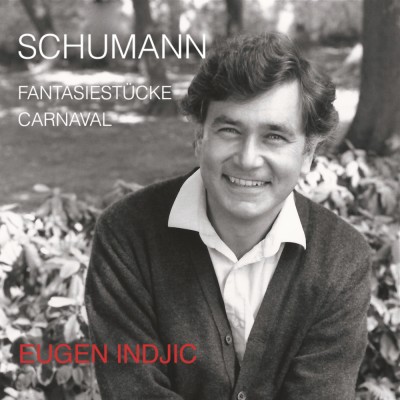 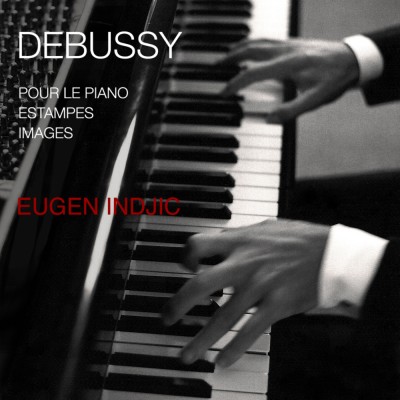 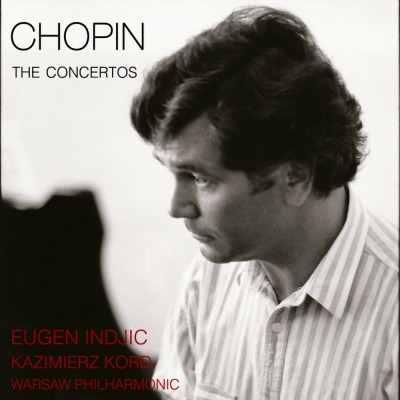 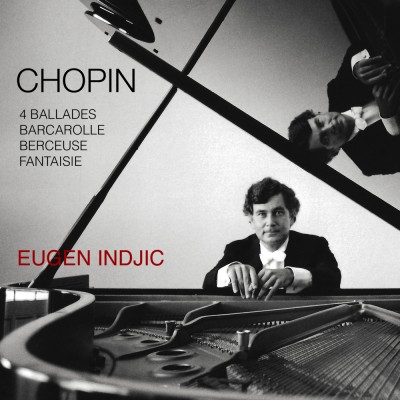 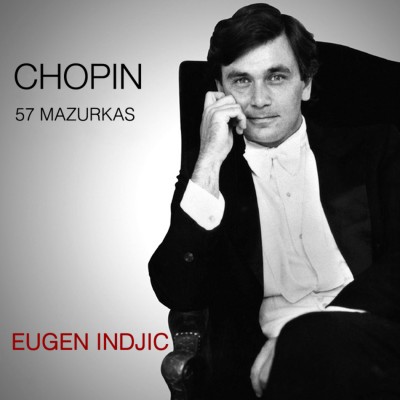 “A sumptuous tonal palette … His luminous and distinguished reading draws spectacular landscapes through which he guides us with a serene and reassuring hand. The pianist gives us the impression that suddenly we begin understanding a foreign language. It is a journey truly worth taking.”

“Through his deft rendition of Chopin’s music, Eugen Indjic appears as a poet. Because he avoids the improvisation and builds each phrase according to natural breathing, he gives a serene and achieved reading of these Scherzos and Impromptus along his integral of the Mazurkas”
Classica-Repertoire

“With exemplary honesty and humility , Eugen Indjic displays an interpretation flooded with light. His interpretation rests on a spontaneous dexterous power, with full sound and ample phrasing. It is brilliant, though without ostentation. We love it, without moderation!”
Pianiste

“Eugen Indjic demonstrates dazzling technical qualities and a style which can only fill with enthusiasm. He offers an interpretation as effervescent as it is virtuoso, where the physical power of his playing renders certain pages with almost photographic realism”
Le Monde de la Musique

“Through a luminous and supple playing, Eugen Indjic offers us a gilt-edged performance of Debussy. Again it is necessary to listen to his mind-blowing interpretation of Fireworks… ”
Diapason

“Eugen Indjic’s style is elegant, expansive, aristocratic, but also warm and passionate when the music calls for it. It is a Chopin style of beauty and breadth but also energy, inner strength, power, and even humour. His handling of the Ballades is certainly on par with some of the finest accounts.”
American Record Guide

“Indjic brings considerable power to the Ballades. He has a strong conception of them, and he projects that conception effectively, with an often poetic expressiveness. In all four pieces, his phrasing – in the modern, straightforward,unaffected manner – is shaped superbly. His ample technique and gleaming tone in the Ballades and his lyrical, sensitive, idiomatic playing in the Berceuse and Barcarolle are among the best I know. The Fantasy is strong and appealing here, with an impressive feeling for continuity”
Fanfare

“My word of honour, never have I heard Chopin with such intense ardour, such interiority. Miraculous pianist indeed!”
Paris, Le Figaro

“This season’s most beautiful Mozart ! As always, his Chopin was outstanding.”
Boston Herald

“Indjic is phenomenal; a pianist of genius which cannot be explained. One can only listen and admire.”
Copenhague, Berlingske Tidende

“Eugen Indjic has reached the perfection of his art … As he hit the final chord of the Tchaïkovski Concerto, the audience gave him a thunderous standing ovation.”
Prague, Slovo